On 2017 we saw a mind-blowing number of crowdsales and ICOs running in the Ethereum blockchain. They have proven to be a powerful tool to collect the funds required to start a project, and they are one of the most common uses for smart contracts right now. The Zeppelin team has been very involved in this topic, auditing many crowdsale contracts, and supporting OpenZeppelin, the most popular framework to build these crowdsales. What we found was a lot of contracts repeating the same basic concepts, with very similar code, and common vulnerabilities.

Earlier this year, part of the team took the task to redesign our base Crowdsale contract in order to support a lot of new crowdsale flavors out of the box and to make the experience of building and publishing your own crowdsale more clear and secure. The idea is to make audits less necessary, with an architecture that is modular, that encourages reuse and that will be collectively reviewed. These new contracts were added to OpenZeppelin version 1.7.0, and since the release they have been widely used by our community with great success. So, this is a good moment to show off :)

Let's start with a dive into the source code of the Crowdsale base contract. The first thing you will notice is a lot of comments, guiding you through the details of the OpenZeppelin crowdsale architecture. They explain that some functions are the core of the architecture and should not be overriden, like buyTokens. Some others like _preValidatePurchase can be overriden to implement the requirements of your crowdsale, but that extra behavior should be concatenated with the one of the parent by calling super, to preserve the validations from the base contract. Some functions like _postValidatePurchase can be just added as hooks in other parts of the crowdsale's lifecycle.

Building on top of this base, we now provide some contracts for common crowdsale scenarios involving distribution, emission, price, and validation.

So, let's say that you want to set a goal for your crowdsale and if it's not met by the time the sale finishes, you want to refund all your investors. For that, you can use the RefundableCrowdsale contract, which overrides the base _forwardFunds behavior to send the funds to a fancy RefundVault while the crowdsale is in progress, instead of sending them directly to the wallet of the crowdsale owner.

Another common scenario is when you want the tokens to be minted when they are purchased. For that, take a look at the MintedCrowdsale contract, which overrides the simple _deliverTokens behavior of the base class to call instead the mint function of an ERC20 Mintable token.

To get started developing and deploying a crowdsale using the OpenZeppelin framework, Gustavo Guimaraes published a nice guide where you will see in action a crowdsale that is timed and minted.

These are just a few examples. I invite you to explore the OpenZeppelin crowdsale contracts to see all the new flavors that you can easily use to fund your cool idea; and take a look at the SampleCrowdsale contract, a more complex scenario that comes with full test coverage. If you like OpenZeppelin, remember that you are welcome into our vibrating community to help us adding new contracts or improving the existing ones.

On the repo you will also find that all these contracts are very well tested. And as we have seen, the new architecture is clearer and safer, with each contract explaining the functions that you can or can't override, and how to do it. However, you should be extra careful when combining them. It's not the same to have three contracts with one condition than to have one contract with three conditions. The combination increases the attack surface, so you need to have a good idea of what you want to achieve, and know the implementation details of the tools you are using.

Before you go ahead and deploy a complex crowdsale that combines some of our contracts, I would like to spend some time going deep into how Solidity works when you combine contracts through multiple inheritance, like Gustavo did in his guide to make a contract that inherits from TimedCrowdsale and from MintedCrowdsale.

Multiple inheritance is hard, and it can get very confusing if you abuse it. Some languages don't support it at all; but it is becoming a very common pattern on Solidity.

The problem, from the point of view of the programmer, is to understand the order of the calls when a contract has multiple parents. Let's say we have a base contract A, with a function named f:

Then we have two contracts B and C, both inherit from A and override f:

And finaly we have a contract D, which inherits from B and C, and overrides f too:

What happens when you call D.f?

This is called the diamond problem, because we end up with a diamond-shaped inheritance diagram: 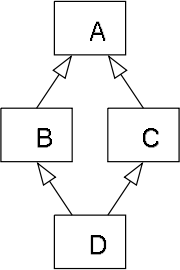 (the image is from wikipedia)

To solve it, Solidity uses C3 linearization, also called Method Resolution Order (MRO). This means that it will linearize the inheritance graph. If D is defined as:

then D.f will call:

When D inherits from B, C, the linearization results in D→ C→ B→ A. This means that super on D calls C. And you might be a little surprised by the fact that calling super on C will result on a call to B instead of A, even though C doesn't inherit from B. Finally, super on B will call A.

If D is instead defined as:

then D.f will call:

When D inherits from C, B, the linearization results in D→ B→ C→ A.

I recommend you to read the wikipedia pages of Multiple inheritance and C3 linearization, and the Solidity docs about multiple inheritance. You will find in there a complete explanation of the C3 algorithm, and an example with a more complicated inheritance graph.

To better understand how this can impact your crowdsales, take a look at the case that Philip Daian brilliantly explains on his blog post Solidity anti-patterns: Fun with inheritance DAG abuse. There, he presents a Crowdsale contract that needs "to have a whitelist pool of preferred investors able to buy in the pre-sale [...], along with a hard cap of the number of [...] tokens that can be distributed." On his first (deliberately) faulty implementation, he ends up with a crowdsale that checks:

Pay close attention to the resulting condition, and notice that if a whitelisted investor buys tokens before the crowdsale has ended, she will be able to bypass the hard cap, and buy as many tokens as she wants.

By just inverting the order on which the parents are defined, he fixes the contract which will now check for:

Now, if the purchase attempt goes above the cap, the transaction will be reverted even if the sender is whitelisted.

Our new architecture was crafted for using require instead of returning booleans, which works nicely to combine and conditions, and to revert the transaction when one fails. Let's say that we have a crowdsale that should only allow whitelisted investors to buy tokens while the sale is open and the cap has not been reached. In this case, the condition to check would be (in pseudocode):

Our contract would be as simple as:

It doesn't matter how you order the parents, all the conditions will be checked always. But take this with a grain of salt. All the conditions will be checked, but the order will be different. This can have different side-effects on Solidity, as some paths will execute statements that other paths won't, and it could lead an attacker to find a specific path that is vulnerable. Also, if your parent contracts are not super clear, they might be hiding an || condition in a few hard-to-read code statements.

It's very easy to think that the parent contracts will just be magically merged into something that will make sense for our use case, or to make a mistake when we linearize them in our mind. Every use case will be different, so our framework can't save you from the work of organizing your contracts' hierarchy. You must analyze the linearization of the inheritance graph to get a clear view of the functions that will be called and their order, and always always add a full suite of automated tests for your final crowdsale contract to make sure that it enforces all the conditions.

To finish, I wanted to show you my repo where I will be doing experiments with crowdsales and their tests: https://github.com/elopio/zeppelin-crowdsales

Take a look at my PreSaleWithCapCrowdsale contract. You will see that I preferred to be explicit about the conditions instead of using super:

I encourage you to join me on these experiments, to try different combinations of crowdsales and to play switching the order of the inheritance graph. We will learn more about the resulting code that Solidity compiles, we will improve our mental picture of the execution stack, and we will practice writing tests that fully cover all the possible paths. If you have questions, find errors on the implementations in OpenZeppelin, or find an alternative implementation that will make it easier to develop crowdsales on top of our contracts, please let us know by sending a message to the slack channel. I am elopio in there.

A relevant experiment here is to use composition over inheritance. In OpenZeppelin we couldn't implement an architecture based on composition because of the high gas costs implied, especially during deployment. That is one of the reasons we are now hard at work on zeppelin_os, which minimizes deployment costs by helping you use libraries that are already on-chain. Expect exciting news very soon!

Thanks a lot to Ale and Alejo, who worked on these new contracts and helped me to understand them. <3